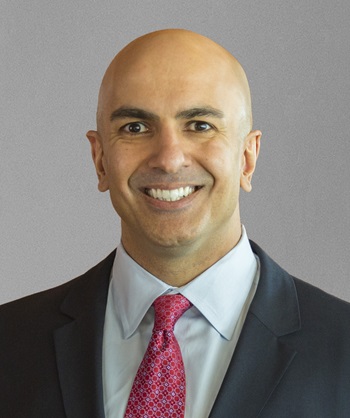 NEEL KASHKARI has been president and chief executive officer of the Federal Reserve Bank of Minneapolis since Jan. 1, 2016. He serves as a voting member on the Federal Open Market Committee, bringing the Ninth Federal Reserve District’s perspective to monetary policy discussions in Washington, D.C. In addition to those responsibilities, Neel oversees Minneapolis Fed operations and leads its many initiatives. Among them, he was instrumental in establishing the Opportunity & Inclusive Growth Institute, whose mission is to ensure that world-class research helps to improve the economic well-being of all Americans. Most recently, he has joined with retired Minnesota Supreme Court Justice Alan Page to propose amending Minnesota’s constitution to make quality public education a fundamental right. This effort supports the Fed’s mandate to achieve maximum employment, with education being a key to obtaining a good job. Under Neel’s leadership, the Minneapolis Fed also released an action plan on “Ending Too Big to Fail,” which calls for tighter bank regulations to avoid future taxpayer bailouts of large financial institutions. Neel earned his bachelor’s and master’s degrees in mechanical engineering from the University of Illinois. He became an aerospace engineer, developing technology for NASA missions. Eventually turning to finance and public policy, he earned his MBA from the University of Pennsylvania’s Wharton School, joined Goldman Sachs, and served in several senior positions at the U.S. Department of the Treasury, including overseeing the Troubled Asset Relief Program, or TARP, during the financial crisis. Before joining the Minneapolis Fed, he ran for governor of California in 2014 on a platform focused on economic opportunity. He lives with his wife, Christine, daughter, Uly, son, Tecumseh and Newfoundland dogs—Webster and Newsome—in Orono, Minn.