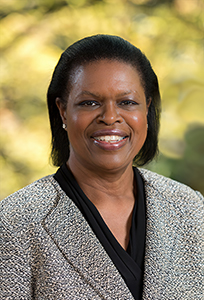 KAYE HUSBANDS FEALING is Dean of the Ivan Allen College of Liberal Arts at the Georgia Institute of Technology, formerly the Chair of the School of Public Policy, Georgia Tech. She specializes in science of science and innovation policy, the public value of research expenditures, and the underrepresentation of women and minorities in STEM fields and workforce. Prior to her position at Georgia Tech, Husbands Fealing taught at the Humphrey School of Public Affairs, University of Minnesota, and she was a study director at the National Academy of Sciences. Prior to the Humphrey School, she was the William Brough professor of economics at Williams College, where she began her teaching career in 1989. She developed and was the inaugural program director for the National Science Foundation’s (NSF) Science of Science and Innovation Policy program, co-chaired the Science of Science Policy Interagency Task Group, and served as an Economics Program director. Husbands Fealing was also a visiting scholar at Massachusetts Institute of Technology’s Center for Technology Policy and Industrial Development. Husbands Fealing became an Elected Member of the American Academy of Arts and Sciences in 2021. She also is an Elected Fellow of the National Academy of Public Administration, an Elected Fellow of the American Association for the Advancement of Science (AAAS), and serves on the AAAS Executive Board. She was awarded the 2017 Trailblazer Award from the National Medical Association Council on Concerns of Women Physicians. She currently serves on NSF’s Committee on Equal Opportunities in Science and Engineering, NSF’s Education and Human Resources Directorate’s Advisory Committee, the General Accountability Office’s Science, Technology Assessment, and Analytics Polaris Council, and the Georgia Intellectual Property Alliance. She is a board member for the Society for Economic Measurement. Husbands Fealing holds a Ph.D. in economics from Harvard University, and a B.A. in mathematics and economics from the University of Pennsylvania.