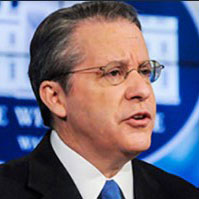 GENE SPERLING was director of the National Economic Council under both President Barack Obama (2011 to 2014) and President Bill Clinton (1997 to 2001). He is the only person to serve in that capacity for two presidents. He also has served as deputy director of the National Economic Council (1993 to 1996) and counselor to the secretary of the Treasury and member of Auto Task Force (2009 to 2010). He is the founder of the Center of Universal Education at Brookings Institution, which focuses on education for girls and boys in poor and conflict-impacted nations and was its first director from 2002 to 2008 and current chair of the Advisory Board. Sperling was a senior fellow at the Council of Foreign Relations (2002 to 2008) and was also a senior fellow at the Center at American Progress. Sperling is the author of Economic Dignity (Penguin Press, May 2020) which explains why his three-part definition of economic dignity should be the North Star for economic policy.  He is also the author of The Pro-Growth Progressive (2005), What Works in Girls Education: Evidence for the World’s Best Investment (2004, 2015), is a former Contributing Editor for The Atlantic and has shared writing credit on four episodes of NBC’s The West Wing, where he was a consultant for four seasons.